The Memorial stands as the most distinguished monument to Washington ever built by a private organization. Erected in the 1920s and 30s, it soars 333 feet as a beacon of light and knowledge, educating and inspiring all who visit it. Recognized in 2015 as a National Historic Landmark, the Memorial is one of the most impressive and iconic buildings in the area around our nation's capital. 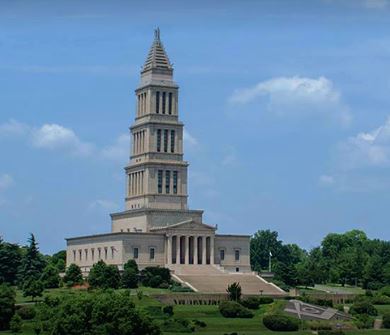 At the urging of the Alexandria-Washington Lodge, Joseph W. Eggleston, the Grand Master of Virginia, invited every Grand Master in the United States to assemble in Alexandria-Washington Lodge on February 22, 1910, for the purpose of forming an Association to plan and build "a suitable Memorial Temple to George Washington, the Mason." Representatives from 26 Grand Lodges gathered on that day to endorse the erection of the Memorial, and the George Washington Masonic National Memorial Association was formed. Thomas Shryock, Grand Master of Maryland, was elected the first President of the Memorial Association.

Ten years after the first official meeting of the association, the concept of a colossal building as a Memorial "lighthouse" to Washington was approved by the Grand Lodges of the United States. The site was selected because it followed the ancient tradition for the location of temples on hilltops or mountains. It was also located on land with which General Washington was familiar, as he spent a great deal of time in Alexandria and its environs.

The groundbreaking ceremony took place on June 5, 1922. Louis A. Watres, President of the Memorial Association and Past Grand Master of Pennsylvania, and Charles H. Callahan, Past Master of Alexandria-Washington Lodge No.?22, and a future Grand Master of Virginia, participated in the ceremony. Despite the great expense, the Memorial Association was determined not to borrow money. Construction only proceeded as money was collected for each stage of the project.

On November 1, 1923, the Memorial's cornerstone was dedicated in a Masonic ceremony. President Calvin Coolidge, former President and Chief Justice William H. Taft, and numerous other dignitaries performed the ceremony before a crowd of thousands of Freemasons from around the nation. The onset of the Great Depression did not stop work on the Memorial. For over 10 years, Freemasons steadily and faithfully contributed to the construction of the Memorial. On May 12, 1932, the bicentennial year of George Washington's birth, the dedication of the Memorial took place with President Herbert Hoover participating.

After World War II, work on the Memorial's interior began in earnest. By 1970, the George Washington Masonic National Memorial was completed. In 1999, the large Square and Compasses emblem was added to the front lawn, a visible sign to the Masonic nature of the Memorial.

The photo of the 1923 Cornerstone Laying is from the archives of Franklin Lodge No. 20. The Cornerstone Laying was attended by several thousand Freemasons shown clearly in a larger copy of this photo. The Grand Lodge of Rhode Island is one of many Grand Lodges that annually provide financial support to the Memorial's Endowment Fund.

Standing Order No. 91.2 requires that each applicant for the Degrees of Freemasonry pay, in addition to other fees, $3.00 for the Endowment Fund of the George Washington Masonic Memorial before receiving the Entered Apprentice degree. Also, Standing Order No. 107 states that annually $1.00 for each active member on the rolls be contributed to said endowment fund. M∴W∴Carl B. Willi, PGM is currently serving on the Board of Directors of the George Washington Masonic National Memorial Association. His term expires in February 2022.

Save the Date Monday, February 20, 2023 for the Re-enactment of the Cornerstone Dedication of the George Washington National Memorial. Join your brothers for this Historic National Masonic Event!